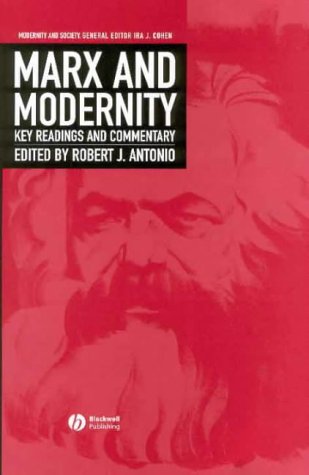 Why do we insist on analysing the early modern classics (Marx, Weber and Durkheim) after more than a century? Was Marx a master theorist of European modernisation who bequeathed a legacy that will outlive him? Are there any useful or relevant ideas in Marx's writings, which would significantly advance our understanding of contemporary societies? Should we dismiss Marx's outdated theories and scrap materialist sociological tools because of the failure of communist regimes? The aim of Robert Antonio's book is to provide answers to these frequently-asked questions, amongst others. The book is divided into two different and broad sections: a selection of thirty-eight of Marx's classical readings or masterpieces and fifteen articles by contemporary, famous contributors, leading researchers and some maverick social-thinkers.

Part one opens with an illuminating, extended and systematic chapter, Antonio's overview of Marx's life and theories. Throughout the fifty page introductory chapter, the author illustrates, points out and sketches the key sociological concepts developed by Marx (and taken-for-granted by most sociologists): historical materialism, social cooperation, labour and value, modern industry and, amongst others, communism. Immediately afterwards, a well-organized and well-presented collection of texts is launched, covering the whole of Marx's main topics. The selection takes as its point of departure the early writings with Engels and ends with his latest books.

Part two reprints and gathers contributions of established scholars, ranging from blunt opposition to Marx through to those who see his writings as timely and basic to the identification of the core tendencies of current capitalism. The project is a drive to update Marxist theories, through thematic chapters dealing with specific issues. The pieces selected and provided by the book are renovating endeavors of evaluating Marxism and they embrace the full spectrum of topics, discussions and examples. The articles are sorted into a few thematic groups: post-communist outlooks (Aronson, Harvey and Cassidy), information-capitalism (Rifkin), race and ethnicity (Frank, Wilson and Davis), proletarianisation and segregation (Greider and Gray), the immigration "problem" (Sassen), resistance to neo-liberal globalisation (Faux, St. Clair and Shapiro), class theories (Olin Wright) and gender inequalities (Fraser). These topics are dealt with in some depth and these pages are littered with Antonio's comments and summaries. Needless to say, some chapters are more satisfying than others.

The book also contributes to the debate on the status of the sociological classics and the importance of Marx within them. It reminds us of the relevance of classical theories in sociological research. A kind of shortcoming turns on Antonio's choice of title: unfortunately, the connection between Marx, enlightenment-thought and Modernity is an issue not enough explored in this book and barely receives any mention (unlike in his A Weber-Marx dialogue, University Press of Kansas, 1985).

The key point is this: Is Marx still useful in explaining contemporary capitalism and current affairs? Antonio claims that "neoliberal hegemony recreates the types of social problems discussed by Marx" (p. 252). This theory is certainly persuasive: we still can rescue and re-conceptualise most of Marx's viewpoints, in order to address today's historical conditions in our turbulent times of deregulated capitalism. However, the book cannot be accused of massaging the egos of orthodox communists (Marxism as a unified theory of everything, Marx as an idol or the economic determinism), as it points out several mistakes, flaws and weaknesses of the German philosopher. Regrettably, there is also no concluding chapter, for the sake of identifying what definitely remains of Marx - and constitutes his lasting legacy - and what does not. This is witnessed by the fact that there is not much engagement between parts one and two. Thus we find, so to speak, two different books within the same volume.

In conclusion, this ambitious book brings together the major contributions of Marx, extensively revised, and the debate about their relevance in late industrial societies. The collection will be extremely useful and worthwhile in academic circles and for students (undergraduate and postgraduate) addressing social theory, neo-liberal capitalism, globalisation and Marxist analysis. Antonio's main goal is to draw attention to modern sociological thinkers and to shed light on the occasionally underestimated writings of Marx, which can be "sociologically appropriated" in different forms. Although the book is aimed primarily at introductory-level students, most sociologists would benefit from the accessible perspective presented by Robert J. Antonio. It is a book to be recommended, avoiding opaque terminology and enhancing our understanding in these times of ongoing, capitalist globalisation. Moreover, its achievement is that Antonio's work is not reserved only for the world-wide sociological community or for Marxists alone, but for anyone curious or of wider political outlook, and will appeal to a diversity of audiences.